We’re still having record heat in the Puget Sound region, and our home prices are rising with the thermometer. It’s still a roaring seller’s market out there, especially on the Eastside. We continue to have local markets in dire need of inventory, so this is an excellent time to list your home and take advantage of the current market.

• The months supply of inventory continues to decline from the prior year in Seattle and the Eastside, as well as King and Snohomish counties.
• Closed sales on the Eastside have started to decrease in number due to seasonal trends and lowered inventory.
• The majority of those Eastside closed sales in July sold over original list price.

The Eastside had the highest increase in home sales prices since last July, increasing 9 percent to $681,600. We continue to have the highest median home prices in the region. Inventory had the slightest increase since June's 1.1 months of inventory with July holding 1.2 months (a balanced market reflects 3 to 6 months of inventory). Total closed sales dropped to 932, 3 percent less than July 2014 and 5 percent than last month's 981 total closed sales on the Eastside. 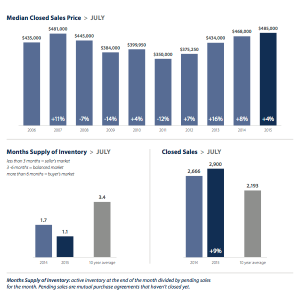 Inventory actually increased for the third month in a row, but was still held at a stark 1.1 months supply. While median sales prices fell 3 percent from the previous month, July's sales prices were still 4 percent higher than the previous year at $485,000. With inventory so low and the county's higher prices, many potential buyers are being pushed farther out than they would have previously wanted to buy.

Snohomish County has increased its median sales price 8 percent since July 2014 to $362,987 last month. It holds a stronger, though less than normal, inventory of 1.5 months. The number of closed sales has increased sharply to 1,156 in July, a 19% increase since the previous year. While many potential buyers are being forced out of the Eastside and the Seattle area, Snohomish County proves to be a less expensive and more promising market.